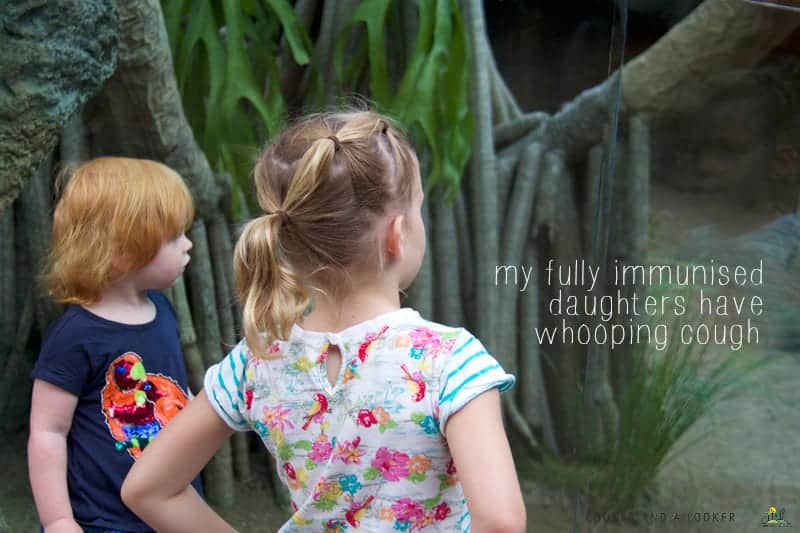 I’m lying on a mattress on the floor, next to a fire engine bed.  Above me are five glow-in-the-dark stars arranged in the shape of the Southern Cross.  I’m having flashbacks to childhood sleepovers - late nights spent talking and giggling in the dark.  But this is no laughing matter.  I'm sleeping on the floor because the Little Sister has whooping cough.

At the other end of the corridor, Bearhands is sleeping in the Big Sister’s room.  She has it too.

The diagnosis finally came on Tuesday evening.  The Doctor who ordered the test on the Little Sister did it as a precaution.  The two Doctors who’ve seen the Big Sister up until now had dismissed the idea that two fully immunised, otherwise healthy children would catch whooping cough.

After we received the news, I set about ringing the alarm bells.  School and daycare needed to be notified, friends and family contacted.  I received a call from a very friendly lady named Debbie at Public Health who asked me who we've been in contact with and filled me in on what is known about whooping cough in immunised children.

The Little Sister has started a strict course of serious antibiotics that will make her no longer infectious.  The Big Sister is past the infectious period.  Immunised children cough less during the day, experiencing their frightening whooping in the colder air of night time.  Debbie said this means they’re less effective at spreading the disease in public, but still very effective at sharing it with their families.  The thought is, the Big Sister picked it up somewhere and has passed it onto the Little Sister.  I'm hopeful this is the extent of the spread.

Antibiotics won’t help the Sister’s coughs; they’re caused by a toxin secreted by the Pertussis bacteria, it will just stop her being infectious.  The Doctor referred to their wracking cough as the hundred day cough.  Bearhands and I will be having these sleepovers for a while, night time is frightening.

I sleep on the mattress on the floor, rising during the night to rub the Little Sister's heaving back, offer sips of water and soothing words and catch the occasional spew.  I wake with a start when she hasn’t coughed in a while, fearing I’ve missed something dire.  Afterwards, I lie in the dark asking the big questions:

how on earth did my two fully immunised children catch whooping cough?

did I unwittingly subject another family to this same nightmare by allowing the Big Sister to go to school a few days last week?

have I forgotten something?  have the kids have been in contact with a woman in her last month of pregnancy or a baby under six months old?

why would anyone knowingly risk their children catching whooping cough (and getting a dose worse than this) ?

Our home, the Sunshine Coast has the dubious honour of having the worst immunisation rate in Queensland and the third lowest immunisation rate in the country.  Only 87% percent of 5 year olds on the Coast are fully vaccinated against measles, meningococcal and whooping cough.  It’s likely that this lack of herd immunity is the reason that the Big Sister picked up this frightening illness and brought it home.

We’re under house arrest for five days.  Painting, drawing and watching ABC for kids, all punctuated by occasional coughing spasms.

what's keeping you up nights?

Immunisation is an emotive topic,  I’ll be moderating comments carefully.
If you cross the line, your comment will be deleted and you'll win a one-way ticket to spankytown. Mrs Woog says there's plenty of room.