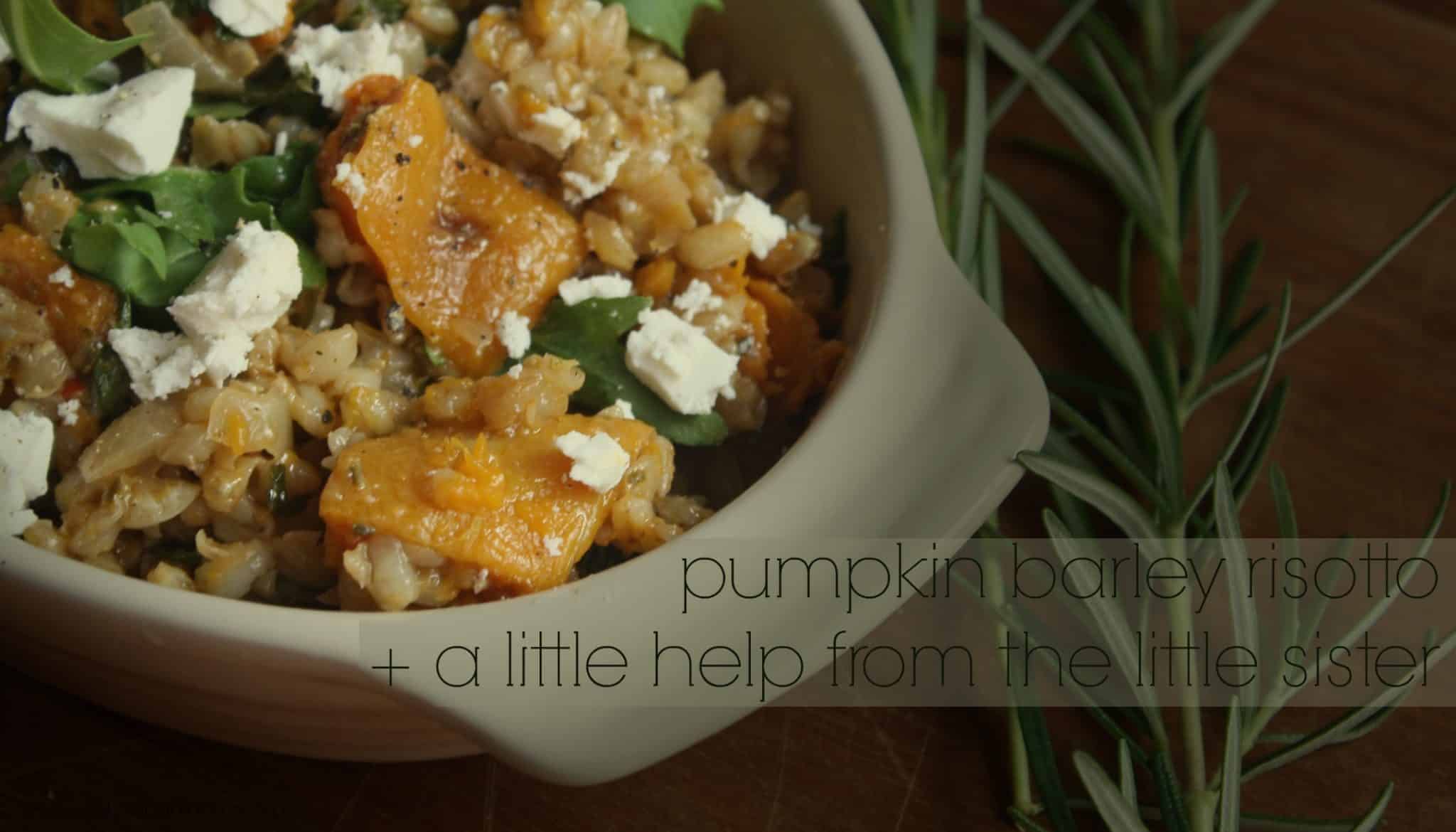 It was so wet this weekend that Bearhands bucked the status quo and didn't disappear into the paddock or the shed.  I spent some time experimenting in the kitchen while he watched documentaries about people from the southern states of America catching, finding, shooting or brewing things.

I've wanted to try making risotto using barley for ages, but I've been a bit hesitant - Bearhands is not a fan of ‘fruitatarian’ meals.  Early in our courtship, I served an (admittedly pretty ordinary) vegetable risotto.  Bearhands ate it all, then said “That was nice.  Let’s never eat a meal without meat again”.  Since then I've been mindful to feed the man meat.

As I made the risotto he asked “so what are we having with this, Amanda?”  I offered to cook him a side of chicken thigh, but he declined and with that we enjoyed our first vegetarian meal in nine years.

Chop the pumpkin into 5cm pieces,drizzle with olive oil and roast in a 180°C oven for 45 minutes or until cooked.

In a heavy based pot, sauté the onion and garlic gently in olive oil until translucent.  Add the drained barley, tomato paste and rosemary; stir.  Increase the heat, add the wine and reduce by half.
Stirring, start adding the stock and water - a ladle at a time, waiting until the stock is absorbed before adding more.  When all the stock is absorbed, taste to check the barley is al dente – if it’s still too crunchy, add more water and continue until the barley is soft to bite.

Add the pumpkin and rocket and stir into the hot barley to wilt.  Serve with goats fetta crumbled on top.

Pearl barley is about to be the new ‘superfood’, but there’s nothing new about it - it just went out of style for a bit.  It’s filling, low GI and best of all it has a great nutty flavour.  It met with Bearhands approval - he declared it "real stick to your ribs stuff", which is high praise from a man who would normally have preferred sticky ribs.

The family collaboration didn't end there.  The Little Sister decided to try her hand at food styling while I was taking the photos for this post.  All the culinary greats have to defend their work with a bare foot while trying to snap a few photos of their creations on the floor next to the window; right Marco?

do your kids ‘help’ in the kitchen?

are you a herbivore or a carnivore?

ever seen a show where the dialogue gets subtitles even though it's in English?

Share68
Pin35
103 Shares
« okonomiyaki, (almost) banged up abroad + a recipe for what you want
vignettes for the unfashionable »