Yesterday dawned a drizzly, cold, miserable day - the kind of weather than inspires me to wear misshapen tracksuit pants, drink copious quantities of tea and contemplate dinner at 9am.

Soup.  It had to be soup.  But with what?  I definitely wasn't going outside - as if the weather wasn't bad enough, the tracksuit pants clearly precluded a trip to town.  It was to be another MacGyver* feed.

I had dried borlotti beans so I consulted google and a taste recipe for Chorizo and Borlotti Bean Soup caught my eye.

This makes a bucket load of soup - consider halving the ingredients if you're only feeding four.

Soak the borlotti beans in water for six hours (or overnight if you're organised).

Drain and rinse beans.  Then place in a saucepan, cover in cold water.  Bring beans to the boil, then reduce to a low heat and simmer for 45 minutes or until tender.  Rinse beans again and put aside.

In the meantime, add chorizo and a little olive oil to a heavy-based pan.  Cook until golden.  Remove from pan and set aside.

Add leeks and garlic to the pan, gently saute until translucent.

Add Chinese rice wine to the pan and boil until evaporated.

Return chorizo to the pan along with stock, chopped tomato, and beans.  Bring to the boil, then reduce heat and simmer for thirty minutes or until soup has thickened slightly.

Season with salt and pepper.

Just prior to serving add the baby spinach and chopped basil.  Stir until wilted.

I loved it - especially the lovely addition of the spinach and mint at the end.  Plus, as the very talented Oskar from Pasta D'Vine once taught me - what meal is not improved by the addition of Gruyère?

Miss Three ate it happily and D was grateful to be warmed by a reheated bowl after his touch football game.

I always have a few chorizo sausages in the freezer, so I can see this becoming a "what's-getting-a-bit-soft-in-the-crisper" special. 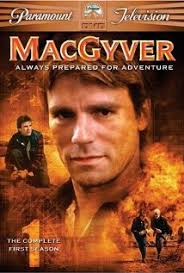 * MacGyver is an American action-adventure television series that ran for seven seasons (1985-1992) on ABC.
The show's title character - Angus MacGyver - is a secret agent with a difference. He is quiet, mild mannered, deeply principled and refuses to carry a gun on his missions.  Drawing on a vast practical knowledge of science, MacGyver is able to make use of any mundane materials around him to create unorthodox solutions to any problem he faces.  **

He's a cooking inspiration around here.  We often gaze into the pantry, call upon MacGyver and turn mundane ingredients into something unexpected.

That said, I'm not sure if MacGyver ever wore tracksuit pants, but that's another story.....